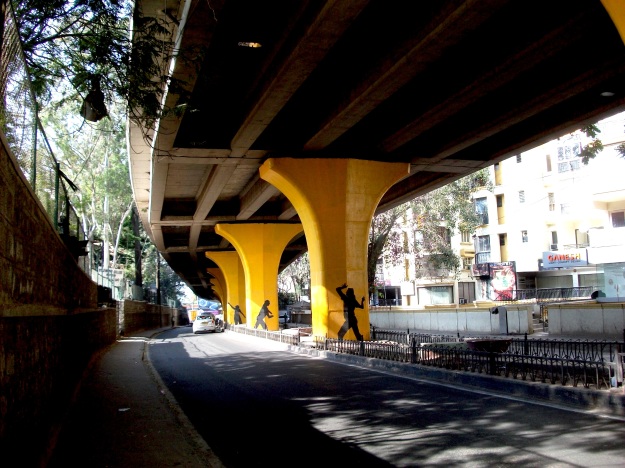 Public Art in Bengaluru by Jaaga.in

An incident occured on May 20th while artists from the Delhi I Love You campaign set out to paint on the walls of Delhi. The artists were stopped form painting an Urdu couplet and forced by the crowd to repaint it with the slogan – Swachh Bharat Abhiyaan (Clean India Mission). You can read more about it here:

The news paper reports and the coverage of it on twitter seems to miss out the nuances of what produced this. END_OF_DOCUMENT_TOKEN_TO_BE_REPLACED

Watched the Marathi film, Sairat in the theatre yesterday and am still so bowled over by the film. For a change it was wonderful to look at how caste got addressed in the film within the larger context of inter-caste love. The first half of the film introduces us to its context – gender, class, caste, electoral politics. It is shot so amazingly beautifully! For me this first half really spells out what it might be like to fall in love and something like this I really haven’t encountered in cinema in India in a long time. The second half brings in living with this love. I was and am still taken aback by how wonderfully nuanced this film is with regard to class, caste and gender. END_OF_DOCUMENT_TOKEN_TO_BE_REPLACED

On April 28, at 8 pm, Jisha (29), an Ernakulam Government Law College student, was found brutally murdered in her house near Perumbavoor, Kerala. Jisha’s body was discovered by her mother Rajeswari, with at least thirty stab wounds, her entrails exposed, and severe injuries to her genitals. Though the police suspect that the culprits have brutally attacked her body in order to hide evidence of sexual assault, post mortem reports and laboratory results, as on date, are awaited to confirm details of the crime.

Jisha and her mother lived together in a small house in Rayamangalam Panchayat. Although multiple schemes by the panchayat for construction of toilets for SC families exist, there are no toilets in this household – this shows glaring exclusions faced by this single mother Dalit household. In spite of Rajeswari complaining to the Kurupampady police about threats issued by certain individuals against her daughter and herself, the police did not take any action. This undeniably points towards the complicity and culpability of the police in the crime. END_OF_DOCUMENT_TOKEN_TO_BE_REPLACED

Written by Hyderabad for Feminism this article gives space for rage and a much needed one.

Suicide is the ultimate act of protest, which makes the human body the active site on which protest is enacted or performed. Suicide is how the person who commits to it tells the world that it has failed to carry out justice by making a statement that is irreversible, incontestable, and permanent. It is not only the suicide note that bears witness to the dead; the violence done to the body itself is a statement, an act.

Source: How not to read a suicide note? – Raiot