What a fabulous picture! 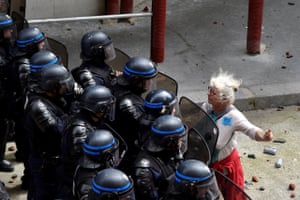 A woman stands in front of police officers as they block access to a street during a protest against proposed labour reforms. Strikes closed the Eiffel Tower and disrupted transport as tens of thousands prepared to march against labour reforms with the Euro 2016 football championship in full swing Photograph: Alain Jocard/AFP/Getty Images